Call of Wild & Romantic Taj
Back to Special Offer 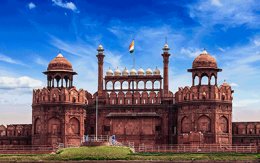 Set amidst the Vindhyan ranges and the eastern flank of Satpura hill range Bandhavgarh National Park is one of the best places to see Indian wildlife. The Reserve named after its highest hill Bandhavgarh (807m), at its center, was the former hunting reserve of the Maharaja of Rewa. With less undergrowth than normal, the reserve offers better sightings of wildlife. Most notably mammals, including the daylight sightings of Tigers in the grassy 'maidans', Don't forget your camera

Itinerary:
Day 1: London Heathrow by flight :
Upon arrival at the airport, you will be met and transferred to your hotel
Standard check-in time. Rest of the day at leisure and Overnight stay at the hotel.

Day 2: Delhi to Katni by train NZM JBP SF Express:
Full day sightseeing tour of Delhi. You will get a feel for this city as you explore its historic sights. Raj Ghat which is located on the banks of the river Yamuna is Mahatma Gandhi’s Memorial, where he was cremated following his assassination in January 1948. Opposite the Red Fort lies Jama Masjid made of red sandstone and white marble, completed in 1656. It is India’s largest mosque. Explore the bustling cultural delight of the colorful market on the 'cycle rickshaw' for a unique experience from the Red Fort, through "Chandni Chowk" or Silver Street, experiencing the sights and sounds of this very busy avenue-heading west from the Fort. You will take a view of Red Fort – the 17th-century imposing fortress built in red sandstone is surrounded by a huge boundary wall 33m high. Inside are exquisite palaces and beautiful gardens.
Afternoon you will head into New Delhi, visiting Humayun’s Tomb, an impressive garden tomb with high arches and a double dome, built by his wife Haji Begum in the 16th Century. An early example of Mughal architecture considered the predecessor of the Taj Mahal. Then continue on to the wonderful Qutab Minar - the landmark of Delhi, the beautiful grounds feature the well preserve a huge tower of victory standing over 72 meters. You will drive on to Rajpath and through to India Gate and the Lutyens Delhi with its tree-lined boulevards leading to the British Viceroy’s Palace (Rashtrapati Bhavan) now the official residence of the President of India, the Secretariat, India Gate, and Parliament House. Transfer to H.Nizamuddin railway station to board the train for Katni

Day 4: Bandhavgarh
Morning and Afternoon you will enjoy a game drive in Bandhavgarh National Park

Day 5: Bandhavgarh to Katni by surface
Katni to Agra by train Mahakaushal Express:
Morning you will enjoy a game drive in Bandhavgarh National Park. Breakfast at the hotel
Transfer from hotel to Katni railway station in time to board the train for Agra
Overnight on board.

Day 6: Agra
Arrive at Agra railway station. Upon arrival at Agra, check-in at your hotel
Afternoon enjoys visiting the world-famous Taj Mahal (closed on Friday) The Mughal Emperor Shah Jahan in memory of his favorite wife, Mumtaz Mahal, who died in 1631, built one of the world’s most famous buildings, the ‘Taj Mahal’. Its perfect proportions and exquisite craftsmanship have been described as ‘a vision, a dream, a poem, and a wonder’. visit the 16th century Agra fort. This commanding red sandstone monument stretches 2.5 kilometers along the banks of River Yamuna, encompasses serene gardens and terrace pavilions, with striking views providing a glimpse of the magnificent Taj Mahal across the river. and Tomb of Itmad-ud- Daulah also called as Baby Taj

Day 7: Agra to Delhi by surface (approx. 210 km)
After breakfast drive to Delhi. Upon arrival at Delhi, check-in at the hotel.
Rest of the day at leisure and Overnight stay at the hotel.

Day 8: Delhi by flight
Transfer from hotel to Delhi airport in time to board flight for London Heathrow