The Best Exotic Marigold Tour
Back to Special Offer 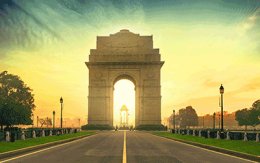 Day 2: Delhi
Arrive Delhi at approximately . Transfer by air-conditioned vehicle to our hotel.  After lunch (Own Cost) we will enjoy a leisurely visit to Akshardham Temple with its impressive 141ft high monument to Bhagwan Swaminarayan. Designed according to ancient Vedic texts known as the Sthapatya-Shastra, it features a blend of architectural styles from across India. The building is constructed entirely from Rajasthani pink sandstone and Italian Carrara marble and features no steel or concrete. Situated on the banks of the Yamuna River and with its splendidly intricate carvings of flora, fauna, dancers, musicians and deities covering its walls, the Temple is an architectural work of art.
Overnight stay at Hotel.

Day 3: Delhi - Agra - Delhi by train
An early start as we transfer to Delhi railway station to catch the ‘Gatiman Express’ to Agra. arriving at approximately .
Agra is a medieval city on the banks of the Yamuna River, founded by Sultan Sikandar Lodi in the year 1506 and capital of the Mughal emperors from 1526 to 1658. It is the heritage of its many Mughal-era buildings, notably the Taj Mahal, Agra Fort and Fatehpur Sikri, all three of which are UNESCO World Heritage Sites, which attracts visitors from all over the world.

Upon arrival at Agra railway station, we will begin our packed tour of Agra with a visit to the world-famous monument of the Taj Mahal. Set on the banks of the River Yamuna, the Taj Mahal is a classic example of Mughal architecture and a symbol of the devotion of Shah Jahan who ordered its construction between 1632 and 1653 as the final resting place of his favourite wife Arjumand Bann Begum (also known as Mumtaz Mahal) who died in 1631. We will continue our tour, visiting the spectacular Agra Fort and explore a history dating back to the 11th century.
We will transfer to Agra railway station to board our train to Delhi departing and arriving . On arrival, we will transfer back to our hotel. Hotel for an overnight stay.

Day 4: Delhi to Jaipur (Approx. 258 Kms, 6 Hrs)
After an early breakfast, we will check-out of our hotel and drive to Jaipur. Jaipur was founded in 1727 by Maharaja Sawai Jai Singh - II, the ruler of Amber. Jaipur is commonly known as the ‘Pink City’ as much of the old city was painted pink to celebrate the visit of the Prince of Wales in 1876. Upon arrival at Jaipur, we will check-in at Castle Kanota, famously known as "The 2nd Best Exotic Marigold Hotel". Built-in 1872, and spread over 8 acres, the Castle is located east of Jaipur and with a built-in museum and library, which displays gold work and a unique collection of rare books, the castle brings the past to life. This evening we will proceed to “Chokhi Dhani” for traditional Rajasthani dinner with dance and music. Chokhi Dhani is a concept capturing the vibrant spirit of Rajasthan and ensuring a perfect Rajasthani experience. Overnight stay at Hotel.

Day 5: Jaipur
This morning we will depart on an excursion to the Amber City Fort situated 11km north of the city, and set amidst the Aravalli hills at an elevation of 111 metres. After lunch (not included) we return to Jaipur and enjoy a visit to The Maharaja’s City Palace, which exhibits a delightful blend of Mughal and traditional Rajasthani architecture. Other sights we will visit include:
- Jantar Mantar, the largest and best-preserved of the five observatories built by Jai Singh II in different parts of the country and featuring the world’s largest stone sundial;
- Hawa Mahal, also known as the “Palace of Winds” is a must-see landmark in Jaipur, with its spectacular pink sand-stone architecture and 953 windows on its outside wall set amongst incredibly intricate carvings.
- Johari Bazaar, the main bazaar, located in the old city and an excellent place to source jewellery and saris.
Overnight stay at Hotel

Day 6: Jaipur
After breakfast, we will say farewell to Castle Kanota and transfer to the Hotel Pearl Palace for a noon check-in. The ornate Pearl Palace Heritage was perfect as a location for “The Second Best Exotic Marigold Hotel”. This evening we will enjoy a cooking demonstration followed by dinner. Overnight stay at Hotel.

Day 7: Jaipur
This morning we will depart the city for a tour of some other local highlights. Our first stop will be the Hindu Pilgrimage site of Galtaji consisting of several ornate temples built amongst the hills overlooking Jaipur. We continue on to Jaigarh Fort, which is situated on a promontory overlooking the Amber Fort and the Maota Lake, and then on to Nahargarh Fort which stands on the edge of the Aravalli Hills, again with outstanding views over the city. Our final visit will be to Sisodia Rani Garden and Palace with its terraced gardens, delightful fountains and painted pavilions. Overnight stay at Hotel.

Day 8: Jaipur to Rawla Narlai
An early start today as we transfer to Jaipur railway station where we will catch the 0600 train to Jodhpur. Arrive Jodhpur  where we will enjoy a tour of the city. Founded in 1459, Jodhpur is known as ‘Sun City’ due to its predominantly pleasant climate as well as being also referred to as the ‘Blue City’ because of the blue-painted houses around Mehrangarh Fort, which will be our first stop on our tour. Mehrangarh Fort, set atop a 125-metre high hill, with walls up to 36 metres high and 21 metres thick, is one of the most impressive forts in India. Writing in 1899, Rudyard Kipling remarked that the Fort was “the work of angels, fairies and giants”. We will continue with a visit to Jaswant Thada – a white marble memorial built-in 1899 in memory of Maharaja Jaswant Singh II. Lunch at Hotel / local restaurant – (Own Cost)

After lunch, we take a scenic drive to Rawla Narlai. Rawla (meaning house of the chieftain/house of power) Narlai is situated midway between Udaipur and Jodhpur and offers a rare peek into rural Rajasthan. This one-time hunting lodge of Jodhpur Royals provides a serene and calming atmosphere which is enhanced by the undivided attention to the individual needs of guests. Upon arrival at Rawla Narlai, check-in at Hotel. Overnight stay at Hotel.

Day 10: Rawla Narlai to Ravla Khempur (Approx. 280 Kms, 6 Hrs)
After breakfast, we will check out from the hotel and drive from Narlai to Ravla Khempur. On arrival, we will check-in at the Hotel Raval Khempur, a key location of ‘‘The Best Exotic Marigold Hotel’ movie. The Ravla Khempur has a vibrant history dating back to 1628 when Khemraj Dadhivadia thwarted the attempted murder of Prince Jagat Singh of Mewar - his reward was a village named Khempur. Rest of the day at leisure and overnight stay at Hotel

Day 11: Ravla Khempur to Chittorgarh Fort  (Approx. 90 Kms, 2 Hrs–one way)
Today we will enjoy an excursion to the spectacular Chittorgarh Fort, which was established in the 7th century on a 180-meter high hill and extends over an area of 700 acres. The fort has a rich and turbulent history but remains remarkably intact today. Return back to Ravla Khempur for an overnight stay.

Day 12: Ravla Khempur to Udaipur (Approx. 50 Kms)
After breakfast, we will check out from the hotel and drive to Udaipur, also known as the ‘City of Lakes’. Set amongst splendid green hills on the banks of Lake Pichola; Udaipur was called ‘the most romantic spot on the continent of India’ by British administrator and Oriental scholar, James Tod, and is a popular tourist destination with its lakes, forts, palaces and gardens. On arrival at Udaipur, we will check-in at the Hotel Jagat Niwas Palace, the rooftop of which is featured as the venue for the social drinks in the movie, The Best Exotic Marigold Hotel. Rest of the day at leisure and overnight stay at the hotel.

Day 13: Udaipur
After breakfast we will begin our tour of the city, visiting the City Palace, which is really a complex of many palaces, including Dil Kush Mahal, which was constructed for the royal ladies by Maharana Karan Singh. The Palace Museum displays a wide range of cultural and artistic heritage dating back to the 14th century, and there are wonderful gardens including the Garden of the Maids of Honour, which, according to legend, was created for the 48 girls gifted in a dowry for Maharana Sangram Singh II in the 18th century. After lunch (not included) we will enjoy a boat ride on the beautiful Lake Pichola, which is home to over 200 species of migratory and resident birds.
Overnight stay at hotel.

Day 14: Udaipur to Delhi by flight
Today we will enjoy a leisurely morning, before transferring to the airport for a flight to Delhi. On arrival in Delhi, we will transfer to our hotel and the remainder of the day will be free to relax or catch up on some last-minute shopping. Overnight stay at hotel.

Day 15: Departure
After breakfast, we will transfer to Delhi Airport for our British Airway flight , and arriving into London Heathrow.