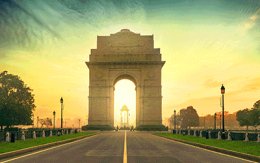 Day 2: Delhi
Arrive at Delhi airport. Upon arrival at Delhi airport welcome, meet and assist by our representative and transfer to Hotel. Rest of the day at leisure and Overnight stay at Hotel

Day 4: Lucknow
Today after breakfast you will enjoy the city tour visiting Bara Imambara – Bara means big, and an imambara is a shrine built by Shia Muslims for the purpose of Azadari. It was built in 1784 by the fourth Nawab of Awadh known as Asaf-ud-Daula. The Bara Immambara is among the grandest buildings of Lucknow. Chattar Manzil or Umbrella Palace was constructed by the order of Nawab Ghazi Uddin Haider and completed after his death by his successor. It is one of the imposing structures built by the Nawabs of Lucknow. Jama Masjid – located in the center of the old city, this congregational mosque was built by Sultan Ahmed Shah in 1423 built-in yellow sandstone. It combines the best of Hindu and Muslim styles of architecture. Rumi Darwaza - of Lucknow is one of the most impressive architectural structures in India. Clock Tower – The huge tower was constructed by Nawab Nasir-ud-Din Haider in the year 1880.
Overnight stay at Hotel.

Day 5: Lucknow to Varanasi by train Intercity:
Transfer from Hotel to Lucknow railway station in time to board the train for Varanasi

Arrive at Varanasi - a famous Hindu holy city situated on the banks of the river Ganges (Ganga). It is one of the oldest continually inhabited cities in the world, dating back thousands of years. It is often also referred to as the "city of temples and learning". The culture of Varanasi is deeply associated with the river Ganga and its religious importance. The city has been a cultural and religious center. Varanasi has its own style of classical Hindustani music and has produced prominent musicians, philosophers, poets, and writers in Indian history. It is one of the cities mentioned in the Bible and has been known to the world for its sericulture.

Upon arrival at Varanasi railway station transfer to the hotel. Rest of the day at leisure to explore Holy city at your own pace. Overnight stay at Hotel

Day 6: Varanasi
Early morning you will be taken on a visit to the Ghats witnessing the Hindu pilgrims perform the rituals and following the centuries-old tradition and belief that by dying in Varanasi or by immersing the mortal remains in the holy Ganges, it clears one from the birth circle and you are incarnated to human life in the next birth. You would be taking a boat cruise on the river Ganges around all the ghats and stopping at the important ones. The riverfront, as seen from a boat, early in the morning, is a spiritually uplifting sight, you de-board the boat at Manikarnika Ghats and walk down towards the narrow lanes experiencing the daily lifestyle of people and visit Golden Temple(Kashi Vishwanath temple)

Return to the hotel to have breakfast. After breakfast you will enjoy a sightseeing tour of the city BHU (Banaras Hindu University), Bharat Mata temple – was inaugurated by Mahatma Gandhi in 1936 and houses one perfect relief map of India carved out of marble. The Temple was gifted by the nationalists Babu Shiv Prasad Gupta (Barat Ratana) and Shri Durga Prasad Khatri, leading numismatists and antiquarians., Drive pass Durga temple- commonly called the ‘Monkey Temple’, it was built in the 18th century. There is a pond adjacent to the temple called “Durgakund”.

Evening witness Aarti by boat on the Ganges. Overnight stay at Hotel.

Day 7: Varanasi
Early in the morning, you will be taken for The program 'Subah-e-Banaras' has begun with a one-hour yoga session followed by a two-hour music recital. The program has been named so, with a view of sunrise from the ghats. Besides yoga and music, ancient practices like Yajna would also be added. The program includes Morning Ganga Aarti with Shehnai and 'Mangalacharan' in the morning ragas. Breakfast at the hotel.

Afternoon excursion to Sarnath the place where Buddha delivered his first sermon to his disciples. The attractions at Sarnath are the Buddha temples, the Dhamekha stupa, Chaukhandi stupa, and the archaeological museum. ( Museum Closed on Friday) Overnight stay at Hotel.